In a LAN one should have the same time on all machines – be them servers, workstations or small controllers, like Pis for real time control as described, e.g., in “Raspberry for remote services” (see also publications).
The rationale: You want

These time dependent features would fail if internal time of the systems differs too much. Hence, we have a hard or soft real time requirement on the synchronisation of those system times. And “real time” does nothing say on absolute values. The maximum tolerable system time difference of two of your systems might be something between 50ns and 20s – it depends. Anyway, if a system after reboot doesn’t know hour nor date abandon all hope.

The proven way to synchronous times is having all systems use the same NTP server or the same ordered set of servers. At least one of them must be reachable for all controllers via (W)LAN.
A good approach is having one or two NTP servers on the internal (W)LAN, getting their own time by one or more external time sources. Reasons for a common internal NTP server are stable transmission times and reachability for all. Not all computers or embedded systems should have access to outside servers.

The NTP server role is often given to domain controllers usually having the internal IP p.r.v.1 to p.r.v.4.
In private homes or small companies DNS (and DHCP) roles are often given the provider’s or your own private router. In Germany this will often be a fritz.box, IP 192.168.178.1 by default. The following excerpt of /etc/ntp.conf sets fritz.box as sole time server:

Note all pool entries being commented out, lest distract the client from the fritz.box. NTP clients may prefer other offers. A fritz.box handling dozens of telephones and some 100 active (W)LAN clients, USB drives and maybe mach more is often less attractive than a full grown NTP server in the Internet. If you really want an extra server or pool use fritz.box’ time source: ntp1.t-online.de; 2.europe.pool.ntp.org e.g.

NTP with fritz.box and Raspberry Pi

On a FRITZ.Box 7490 with FRITZ!OS 7.21 we experienced a failure of its NTP server function for all clients (diagnosed by w32tm, ntpstat etc.) while the box’s NTP server configuration entries were still intact and all (W)LAN communication was OK. In the end (at Netzwerk -> Netzwerkeinstellungen) un-ticking the NTP server role, pressing OK and (after a gulp of coffee) re-ticking it ON re-animated the function. Reseting the FRITZ!Box by power down probably would have the same effect, but this we could not do on a busy working day.

When tracking NTP problems the toil of having Windows and Linux in the net is enough. Not finding the standard NTP tools and services on just the most modern Raspians (some called Raspberry Pi OS now) came as a surprising extra impertinence.
Well, we wanted the old NTP functions with the rich source of documentation and experiences back.

This restores the uniform world of Linux’ NTP.

If NTP fails in a local site the drift of the clients away from official time and from each other will start. A client rebooting in such situation may even start with a time totally gaga. Well, on some Linuxes and Rasbians a trick with the file /etc/fake-hwclock.data guarantees a monotonic time over shutdown/reboot but, of course, no correctness.

To avoid such incorrectness on NTP service failure a redundant time source is necessary.

Therefore often so called “real time clocks” are used. They are battery powered quartz clocks without hands nor display but with an interface to the processor/controller to be read and set. As long as the setting by NTP fails they drift as every other non-synchronised clock and if the battery gets low they drift faster or fail totally.

If by design such “real time clock” is incorporated in the hardware and known to the OS without any configuration (as is with standard PCs) use it.

But think twice before adding such thing to, e.g., an embedded controller. One might havet troubles to get/keep the thing working from beginning or after updates. And checking/replacing a battery in some places where those little systems have to dwell might be a nightmare.
A good alternative might be using the DCF77 signal with an inexpensive DCF77 receiver.

The German official/legal atomic time provided by the PTB is distributed by the long wave transmitter DCF77 near Aschaffenburg/Main. It can be received in large parts of Europe. Its 77,5 kHz carrier is both amplitude (AM) and phase (PM) modulated.

The PM is much less prone to EMI and the time tick can be detected more exactly (about 2µs vs. 200µs with AM). A source of PM disturbance is an extra modulation by a storm moving the large long wave transmitter antenna (probably reported, Bit 15).
The technique of an PM receiver and the decoding of the telegram bits is more complicated and quite expensive. Hence, notwithstanding PM’s advantages, we will use AM receivers.

The AM signal gives a second start tick for all but the last second of a minute. These pulses yield a low frequency (1 bit /s) data stream. The coding in the 59 telegram bits carries all time and date information, including CET (MEZ) / CEST (MESZ). Thus we also get world time UTC.
Hence when adding a DCF77 receiver to a controller/computer within a minute after start of receiving one has the standard time.

Every NTP server in Europe with any sense will in the end use PTB’s atomic clocks and hence DCF77 time. A system with time set by DCF77 will not have make big jumps (or long adjustment times) when switching (back) to NTP.

The rationale of leap seconds is to sync the reliable standard time with the imprecise rotation of the Earth. In the 1950ies the UTC constituded that the Bureau of Earth rotation can dictate twice a year minutes having 58, 59, 61 or 62 seconds.

This nonsense – sorry, my humble opinion*) inspired by sail ship navigation with sextant, paper and pencil – was perfected by world standard Posix/Unix time not being able to represent extra seconds**). It just counts seconds from a starting date and dictates the a day having 84600 s for the interpretation and a common year 31536000. The system UTC+Posix simply violates the principle “Law of noncontradiction”.
The excerpt of IERS Bulletin C 52 with NTP time stamps added shows the problem:

DCF77 delivers not UTC but TAI as MEZ(CET)/MESZ(CEST) by a reversible function. Hence, of course, DCF77 is OK while UTC-based NTP is not. 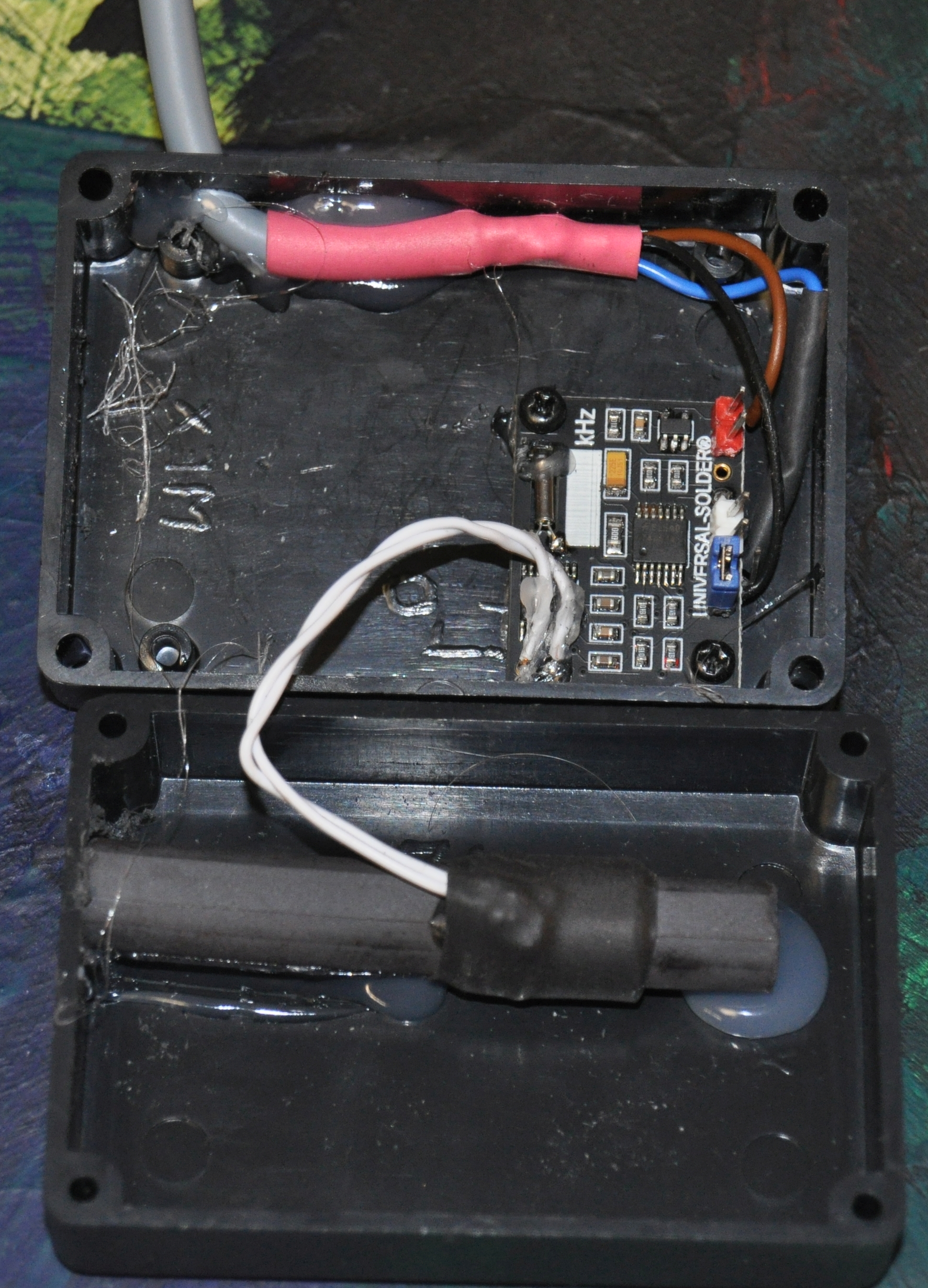 ______
Note *):  Might the Brexit reduce the power of the British admiralty so, that the rest of the world can get rid of leap seconds.
Note **): The UTC people forgot to standardise a representation as seconds count in the 50ies and the Posix people did it wrong in the 70ies.

As said for technical and financial reasons we will use AM receiver modules. You get little boards + feritte antenna for below 10€ and better quality ones for ~14€. Adding the cost for a small plastic (!) case 5m cable – for the freedom to find a good place for the antenna – etc. you can have a DCF77 receiver directly connectable to a Raspberry Pi or another controller for less than 30€.

There are AM receiver modules below 10€ from Pollin and other vendors. The have been used with success. To test them before use an oscilloscope or a programme, like dcf77onPi. The log excerpt

shows delivering erroneous (e) and undefined (u) results as well as short / spiky (b s) modulation pulses and periods. This happens with very bad receiving conditions (misdirected antenna or strong EMI) or with low grade receiver modules.
Those cheap module’s circuit consists of an AM receiver chip (MAS6180 e.g.), a filter quartz and almost nothing else. The out pin is very sensitive to EMI seemingly acting as input. Some modules got broken (ending the joy on the bargain) when connected a shielded cable (probe) was connected to an output. Those “MAS6180 only” modules do always need an extra OC output stage and supply filters. Without you hardly get two minutes of fault free pulses.
______
Note *): It’s wiser to put the receiver module and its ferrite antenna in an extra casing connected by a thin three wire (best shielded) cable to the Pi or whatever controller.
Note **): Here a decoupling by multiple NPN open collector output stages would be necessary and probably extra considerations on supply and grounding etc. (But a stack of Pis with common supply and ground could easily share one receiver.)

In the end it is better to spend 12..16€ for a module which comes with all that, like e.g. the CANADUINO DCF77 receiver kit, see image. It comes with all necessary extras to the AM receiver chip: output stages, power supply circuitry and even extra LEDs to optionally watch the operation.
Nevertheless, as it allows an independent power supply for the receiver (more than 3.3V and not from the PI) and the Pi, we always recommend an extra OC output stage: NPN, hfe>200, Rbase 100kΩ; Rcoll 10..100kΩ, Pi’s input pullup is OK.

The excerpt shows no errors for the Canaduino module and good timing values. Logging over days gave 3 errors per hour. This can easily be ignored and bypassed. But 20 to more than 100 – as have been observed with cheap modules – threaten the availability of the time information. 100 per hour or more are a total failure.

Rightfully it has to said: It is possible to use the cheap “MAS6180 only” modules with extra circuitry, meticulous antenna positioning and very “soft” or forgiving timing criteria. One could even filter out one extra modulation spike within a second by a mildly clever algorithm.
But is that worthwhile? 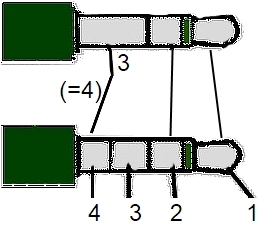 Just take a good module and enjoy the results.

Plugging the module to the µC

There are complete AM receiver module with (of course *)) compatible 3.5mm jacks commercially available under names like “Aktivantenne” or “Filterantenne”. For still reasonable prices you are relieved from drilling and soldering. On the other hand, in most cases of critical (jamming) conditions they were outperformed by the homemade Canaduino based devices.
______
Note *): On plugging in and out this assignment won’t endanger signal pins.
Plugging with (same source) power on is practically safe. With any other permutation it is not.
Note **): When available assign the receiver signal output to GPIO 15 (PIN10, UART in) as Pi input.
This might enable the use of raw DCF77 input drivers for NTP servers. Their implementors chose to use a UART [sic!] instead of a simple binary input for the pure binary AM signal.
Note ***a): This is usually the PDN (power down) pin of the MAS6180C AM receiver IC. Hi or open means Off/ no operation.
Usually (and with the three pin connection) it would be tight to ground. This will be done automatically when the receivers quadripolar male jack is put in three pin female plug on the µC side.
Note ***b): When using a Pi output to control receiver Off/On it is wise to use an open collector output stage with a protective Rc of about 220 Ohm.

DCF77 implementation with a Pi

So far we shared the considerations for choosing DCF77 instead of battery powered “real time clocks” as an extra redundant time source for our embedded/distributed controller projects mostly with Raspberry Pis.

Algorithms and tricks for implementing the DCF77 decoding in C will be reported in the post Handling DCF77 AM signal with Raspberry Pi.

Want to leave a comment? Visit this post's issue page on GitHub.
For commenting you will need a GitHub account.
This post shares the issue / comments with /dcf77decOnPi.html.
top of page
address
legal notice